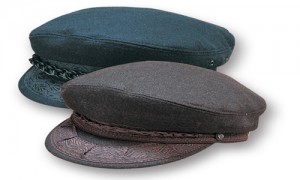 You have seen them in many different settings worn by many different types of people. The Greek Fisherman Hat is a classic made famous by Anthony Quinn and later by John Lennon. The first Greek fisherman hat dates back to 1886 in Athens, Greece.

Often associated with seamanship, the Greek Fisherman Hat has become a part of the uniforms of many sea captains and seamen. Much more than a cap, it has a visor instead of an encircling brim and sports a loosely peaked crown. A braid between the visor and the crown distinguishes the more traditional fisherman’s hat.

One thing is for sure, it’s hard to find an authentic Greek Fisherman Hat especially in Honolulu. The “real deal” should be made of dark wool, although newer designs consist of cotton in various colors.

Find many different styles and colors at the Honolulu Greek Festival, August 25th and 26th at McCoy pavilion in Ala Moana Park. Sizes range from 6¾ to size 8 and all are made imported from Greece.

Get there early for best selection.

This entry was posted in Greek Blogs. Bookmark the permalink.